All posts by: "Jose Luis Alavés"

Alcoy, the beautiful things are inside the province of Alicante

Alcoy, the beautiful things are inside the province of Alicante

Alicante is well-known for its golden sand beaches and crystal clear waters. However, our city has many beautiful spots beyond the coast. One of those places is the city of Alcoy. The best way to get to Alcoy from Alicante is to take A7 highway and drive for 50 minutes. For those who do not like to drive, you can take the train at very affordable prices.

The origins of Alcoy go back to about 40,000 years ago with the first settlements in the area of El Salt. Remains are preserved in caves with rock paintings of hunting scenes. We recommend visiting the primitive cemetery of Los Llometes, Cueva de la Pastora and the villages La Mola Alta de Serelles or El Puig.

Further on, the area was occupied by the Iberian and Roman people whose remains can be seen in the Archaeological Museum of Alcoy. El Alcazar, the remains of Castellar or Arab fortress placed to the west of Alcoy are preserved from the Reconquest.

In the XVIIIth century, the War of Succession took place and the people from Alcoy encouraged Carlos, which earned him the suppression of certain privileges. Years later, Felipe V forgave them and granted them privileges creating the Royal Cloth Factory. Next to the factory you can see the Chapel of San Miguel.

The XIXth century left its industrial footprint in modernist streets to travel today as Santa Rita or San Antonio.

Apart from the festivities in honor of the patrons of Virgen de los Lirios and Sant Maure, the most important celebrations in Alcoy are the festival of the Moors and Christians and Christmas Trilogy, both celebrations being of National Tourist Interest.

The festival of the Moors and Christians is celebrated in honor of St. George and its date is not fixed, although it is around April 23. They commemorate the uprising of the Muslims in 1276 where their leader Al-Azraq would die thanks to the divine help of St. George.

Christmas Trilogy has been celebrated since 1885 and it is the oldest Three King’s Parade in Spain. It is celebrated every 5th of January.

Among the main culinary specialties of Alcoy you cannot fail to try their sausages and tapetes, traditional meal, which are nothing more than appetizers such as aladroc meatballs (anchovies) or espardenyes. Other typical dishes are bajoques farcides, olleta, pericana or borreta.

If you have a sweet tooth, you can enjoy peladillas, torrat or pinyonets. And the typical drink is the liqueur coffee that can be of two types: with coca cola (plis-play) or with iced lemon (mentireta).

Do not stop coming to Alcoy!

The 10 best beaches of Alicante

Taking advantage of the heat and the arrival of the summer, from Apartamentos Tito we want to talk about the ten best beaches of Alicante.

Beach of golden sand, calm waters and blue flag ( is a certification by the Foundation for Environmental Education (FEE) ), located in the resort of Gran Alacant, from which we can see the lighthouse of Santa Pola, bordering in the north with the beach of Arenales del Sol, municipality of Elche.

Having public bus service from Alicante, Santa Pola and Elche.

This cove is one of the best for snorkeling and diving. The beauty of its seabed are known and admired by all the fans of this sports and also there are several recommended routes. Other sports that can be practiced are water skiing or hang out with the kayak. Located in the municipality of Jávea.

Also it is one of the beaches with blue flag of the Province of Alicante.

Pebbles beach belonging to the town of l’Albir in  Alfaz del Pi, clean water with moderate waves and blue flag. Keeping on the seabed a very diverse fauna and flora.

Here we have another beach with blue flag, which is located in the town of Villajoyosa, bordering Esparrelló beach in the north and in the south with Charco Creek. Composition of pebbles, free of algae and good place to enjoy the calm. 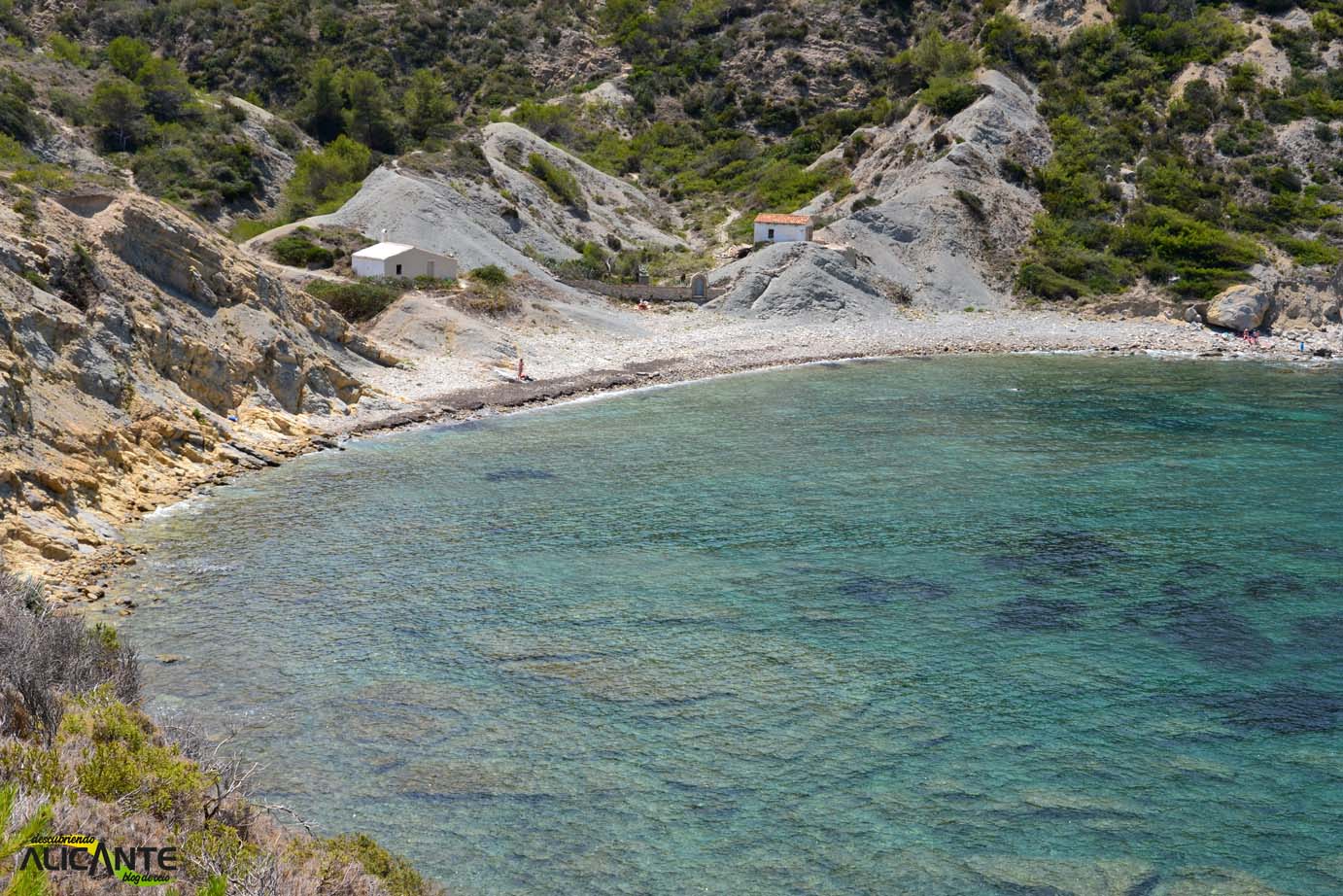 Pebble beach with crystal clear waters that allow us to see a variety of fish and shoals of salps. Located in Denia, ideal place for a relaxing bath in a natural setting.

You can get there taking the tram L4 or 22 bus in Alicante. They let a few meters from the beach.

Small jewel of the Costa Blanca, located in Moraira. Rocky cove with blue waters that invites people to swim, dive or surfing.

Ideal scene to enjoy with the Crag of Ifach which get into the sea.

Sandy beach  located in Guardamar del Segura. Beach that has a fragrant pine forest, thus providing a natural windbreak protecting the city, besides being a haven for walkers.

It has a children’s play area and is also one of the most popular places for surfers because has good waves. 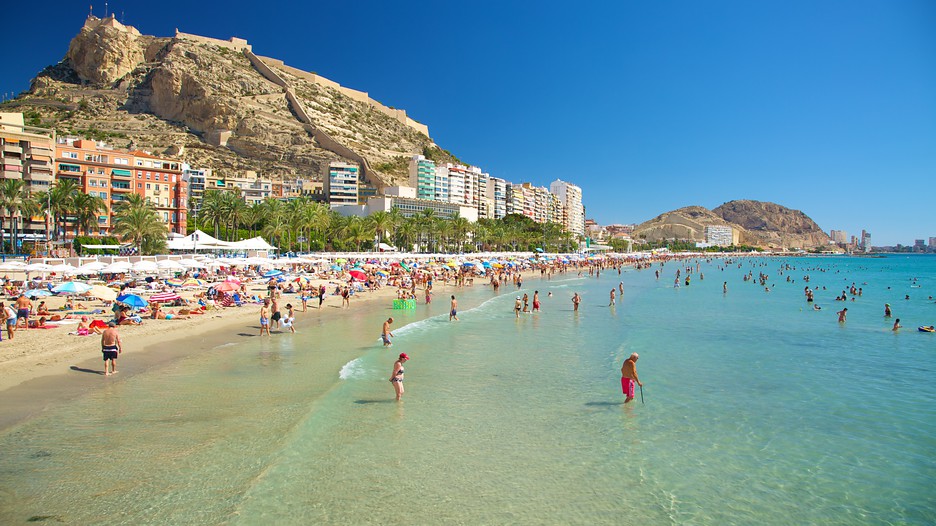 Last but not least we have the main beach in Alicante, located in the old town and just 5 minutes walk from Apartments Tito.

Beach surrounded by a promenade studded with palm trees, which has a wide strip of golden sand and calm waters.

Its location near the city make it a busy area by the locals. During the weekends, Postiguet Beach is well known for its festive local atmosphere

Rules of the contest

This photo contest is being held as part of celebration of the anniversary of San Nicolás’s APARTAMENTOS TITO.

Entry is open to any natural person, regardless of their location or nationality.

4- Character of the contest:

Participating in this contest is free of charge. The sole act of participating implies full acceptance of these rules in its totality. Therefore, any evidence of evading said rules will lead to the exclusion of the entrant, leaving APARTAMENTOS TITO free of its obligations with said entrant.

Every entrant must do the following:

*Those entrants willing to participate using Twitter must set their profile to public so the entry can be identified.

Only one entry by person and profile/account will be allowed.

Entrants are in charge of ensuring that the entry photos aren’t transgressing any rights of intellectual property or third-party image, and release APARTAMENTOS TITO from any responsibility of this matter.

Every data the entrants provide must be authentic and truthful, otherwise their participation will be dismissed and the entrant out of the contest.

Entrants authorize the publication of their data (Name/User name, post text) and their entry photo on APARTAMENTOS TITO’s social networks.

The prize will consist on a weekend for 2/4 people in one of the apartments property of APARTAMENTOS TITO.

In any case this prize will be exchanged for cash or any other means of payment.

Commercialization and/or sale of said prize are forbidden.

The resignation of the prize won’t give any right to its compensation.

Once the term of submission is over, and among those entries submitted according to the rules, a jury formed of members of the board of management of APARTAMENTOS TITO will choose the most original, creative photo, the one that conveys better life in Alicante.

The fact that the entry collects many “likes” or comments on social media doesn’t imply more possibilities of being selected as a winner.

The announcement of the winner will take place June 1st of 2016 by contacting him/her over the social network they used to submit the entry.

By Jose Luis Alavés / 17th May, 2015 / , Sin categoría / 2 Comments
BRAGGIE
Sure you know what the “selfie”, but you know the ‘braggie’ (a variation of the popular ‘Selfie’) the ‘braggie’ is a photo shared on social networks with the intention ofbragging on the destination to which you travel, any spectacular view or the facilitiesof the hotel in which one sits.

From apartments Tito and La Taberna de Tito we encourage you to re-tweet, share, give thebutton ‘I’, from the tavern of Tito, tito in the apartments or in the city of alicante andwill reward you for such social actions with a beer, a glass of wine or a soft drink at the La Taberna de Tito .

Only with that teach us from the mobile such action, you will reward…

Welcome to the ‘braggie”…

By Jose Luis Alavés / 10th April, 2015 / , Sin categoría / 1 Comment
From 2012 the  Tito´s  Apartments San Agustín have been visited by numerous clients fromall over the world. More than 730 reservations over these past two years (2013 and2014) and with a total of more 2230 overnight stays in our apartments.

We just have to thank the great reception received by all our customers, with verygood comments on the social networks that make us continue with this line of work.

Apartments Tito, we are in Alicante, but with each visit from one of our customers, weare a little bit of that part of the world, helping to meet the tastes and preferences ofeach client and the peculiarities of every corner of the planet.

We know that Alicante has a great demand for good weather, the beach and leisure,but this could not maintain it without the good work that he is doing all the servicessector of the city and the province that grow at the same time with the large numberof visitors received our area, we learn and we profesionalizamos.

Alicante grows day by day, and becomes a city essential notebook log of any traveler.

In this link you have information that Alicante is not only a place for Sun and beach:Alicante Facade of the apartments Tito and Tito Tavern Restaurant. The building is from the 19th century.